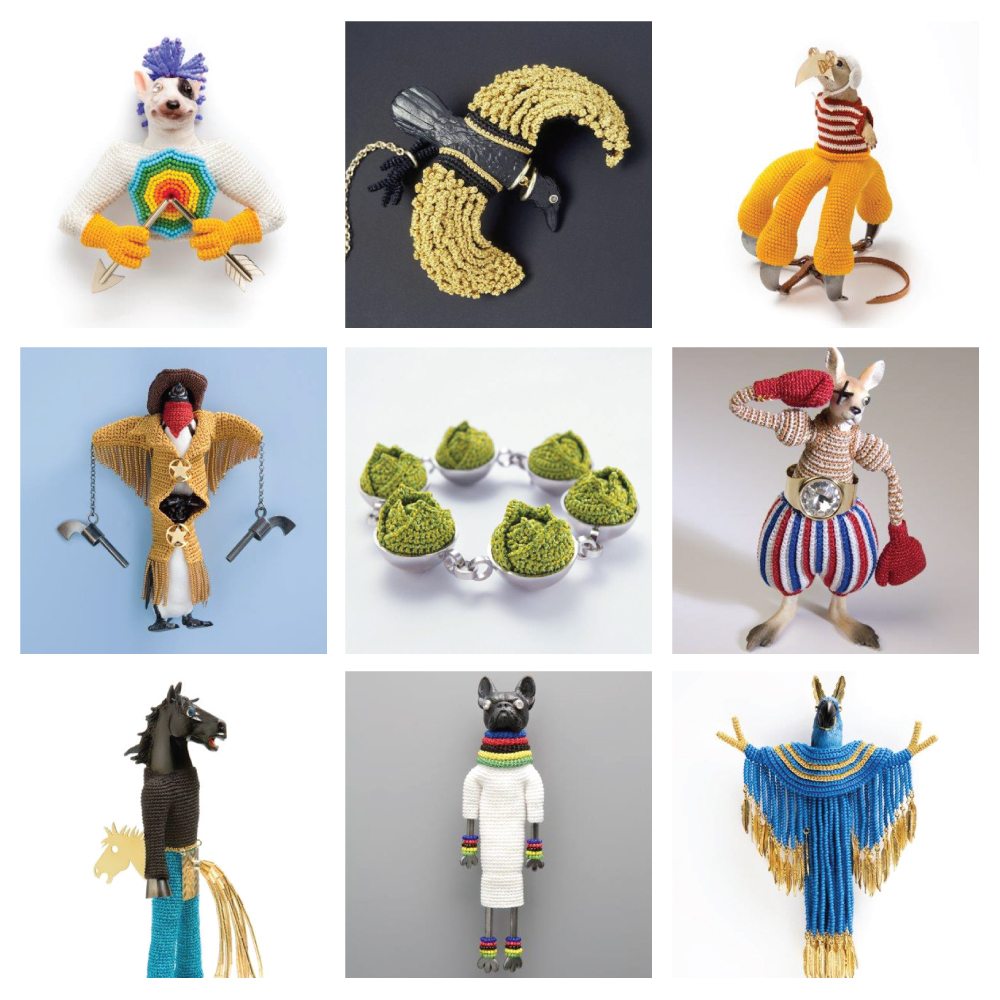 Like a lot of artists I do not like to explain my work too much. I prefer the people to make their own story to each work. By telling my stories or thoughts I make it more difficult for the viewer to come up with their own stories. Mostly people look through so many kinds of glasses that they see more things in my work than I can imagine. But as a viewer myself I understand also that it is very interesting, even sometimes necessary, to know  the stories the artist has about his/her works.

Title: “Once upon a time……” that is mostly the first sentence of a European/American fairy tale.

“My West” is also one letter difference and just a play with the name of a very famous American actress “Mae West”, https://en.wikipedia.org/wiki/Mae_West

Crazy Horse : this title has nothing to do with the real Crazy Horse (the native American Indian man who was a leader of the Lakota tribe.) This horse is  a crazy horse. There is this toy horse children “put on” which makes them do pretend of riding a horse. I played with that and put the horse head looking backwards. So with the tale in front it looks now that the horse is urinating. This is a fun piece I think. 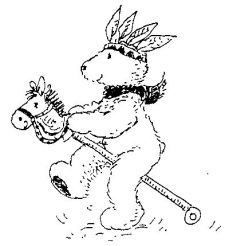 Peace Parrot : the dress is inspired by the native American women’s dress. The “V” sign made by the hands is the sign for peace. Which is repeated by the “V” of the two feathers on the head.

(Dutch people also can have an association with a woman called “Jomanda” . This spiritual but controversial woman always wears a similar blue dress and has her arms in this position when she gives energy to the people). 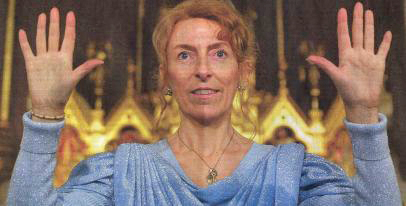 The Peace Puffin is a variation on the peace parrot.

Billy the Kids : Billy the Kid was a notorious outlaw and beloved folk hero as a cowboy/gunman in the Wild West. https://en.wikipedia.org/wiki/Billy_the_Kid  He could shoot very good with a gun and killed many people. Although probably less in reality than in the stories. Mostly boys like to play cowboy, especially because of shooting with toy guns. In this piece the two little penguins make themselves look like they are one big person by standing on top of each other. The pistols hanging out of their sleeves, like children’s gloves which otherwise could be lost easily. The buttons on the jacket look like a sheriff star brooch. The sheriff always hunts after the criminal, so a bit controversial to have the criminal also wearing the sign of a sheriff. 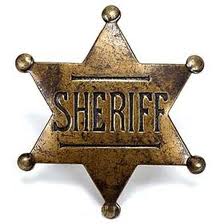 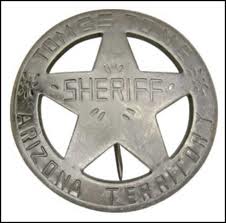 The Gonzalez Brothers : These alpaca (kind of lama) Siamese twin brothers are inspired by the Mexican banditos who were also playing a roll in the Wild West, but more in the southern part of America. I don’t know why but when looking for the right colour handkerchief/scarf I ended up with mint green en pink, not very masculine colours. Maybe to give them a bit of a softer edge.

Incognitos Anonymous:  the animals wear masks like some Indian tribes do at their ceremonies. These masks are inspired by the faces of carved pumpkins used at Halloween.  This group of animals is at a meeting, I have no idea what kind of meeting. They are not looking very happy to me.  I played a bit with the title of the AA, the Alcoholics Anonymous. (people who have an alcohol problem and come together to talk about it) The word “Incognitos” is a bit double when using “Anonymous”.

As an object they are sitting in a circle on a little carpet. The middle red part could be a fire. The black/ white red and green could represent a roulette wheel. Nowadays in a lot of poor Indian reservations the main income is from legal gambling. Gambling can be addictive,  there is also a group called GA, Gamblers Anonymous. But I know these animals sitting on the carpet can be read in many other ways too. 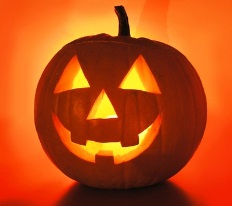 Anti-War Warrior : In this piece I play with the contradictions between peace and fighting/war. This bull terrier is fighting against war. Peaceful because of the broken arrow. In the 80-ties there was this special pin of a broken rifle/gun, when you wore this people could see that you were against war and violence. 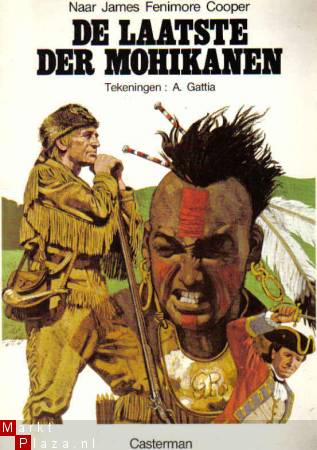 The target is in the colours of the rainbow, which are also colours for peace. The dog has a special haircut, inspired by my memory of an old book cover of the famous book “The last of the Mohicans” .

The Spinster Sisters : On my trips to the USA I always am surprised about women wearing all pastel clothes. Everything is the same pastel colour, shirt, trousers, socks ! (honestly,  I do not like pastel colours, specially pink and peach, horrible) Spinsters are women who have never married/have been single all their life. These sisters gossip a lot I think.

Prairy Pioneer:  Prairie dogs live in borrows under the ground. When they are above the ground they are always looking around them to see if there is any danger. This prairie dog wears a golden beak of an eagle with viewfinder glasses. He “flies” in a special flying machine that looks like an eagle claw searching for new and unknown territories. When wearing this piece as a bracelet you need to keep your arm up, just like a falconer who has his bird of prey on his arm 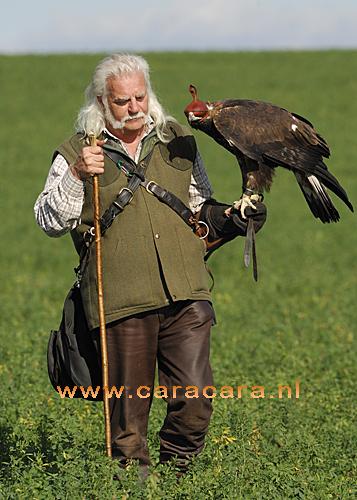 Texas Longesthorn: A Texas Longhorn is a special type of cow from Texas which has extremely long horns. And this bull has the longest horns of all ! Some people have these horns situated in front of their car. 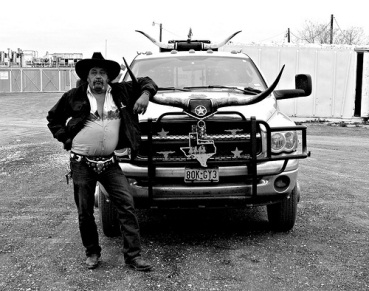 This is a very macho piece, and is looking even more tough because of the sunglasses. The star on the glasses has a hole in the middle. Maybe from a gunshot ?

A bit of a biker type or a heavy metal type ? Bulls have sometimes rings through their nose, this one even has 4 golden ones. He is just a bit over the top I think.

“Roadrunners are American birds that rather run than fly. Most of us know them from the cartoon “The Coyote and the Road Runner”. The plastic toy roadrunners are on silver wagons, a bit like those western carriage wagons or roman chariots. When not worn as a bracelet the roadrunners can stand before a beaded theatre screen of the Arizona desert.” 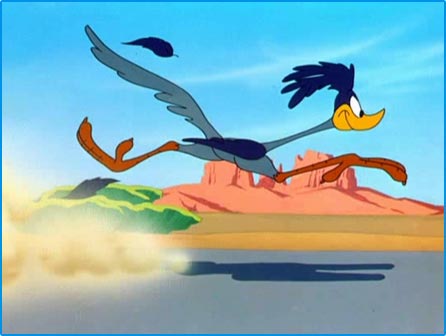 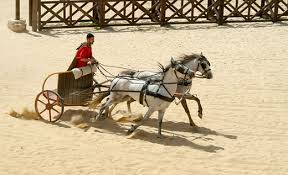 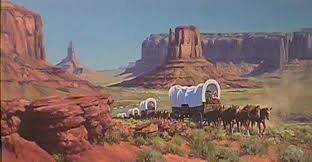 The End IV : This brooch is inspired by a comic series called Lucky Luck. https://en.wikipedia.org/wiki/Lucky_Luke   It is about a cowboy “(who draws his gun faster than his shadow) and his loyal horse Jolly Joker. I didn’t know that before but the maker of this comic is Belgian, so not American at all. The last frame of the comic is almost always a variation of Lucky Luck riding his horse towards the sunset and the words “The End” or “Einde” in Dutch. This type of frame was stuck in my memory 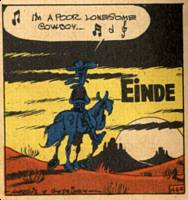 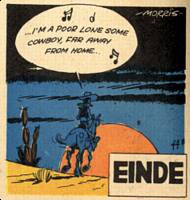 Funny is that after I finished the first piece (I will make 4 different scenes with 4 different coloured horses) I noticed the association between “The End” and the end part of the horse !